It’s 6:18 a.m. when I started writing this. I’ve been driving around town for about an hour on the guise of getting gas for the lawnmower. Here’s what happened.

I totally passed out on the couch last night watching Chopped. The kids were already asleep when I got home, so Jodi and I were enjoying the quiet. I didn’t make it to the dessert round. Sometime in the middle of the night, Jodi woke me up to lay with Keenan, he wet his bed and moved to his sisters. Sis was in our bed.

I go in and start to lay down.

“But I want to catch up on this episode of the Lion Guard. Can I just lay right here?”

So I settle in, the hyenas are messing with the elephants. We last a few minutes before Keenan gets restless and wants to move to my bed, okay okay, “mommies bed“. Jodi’s been pretty restless and is in kind of a half sleep. She’s laying sideways at the foot of the bed, Hattie is smack dab in the middle, so I help Keenan lay on the side hopefully just out of kicking range. There’s no room for me. I head back to Hattie’s bed. I have never been one to have trouble falling back to sleep, hell I haven’t driven through Lynnwood awake in roughly twenty years at any time of day. 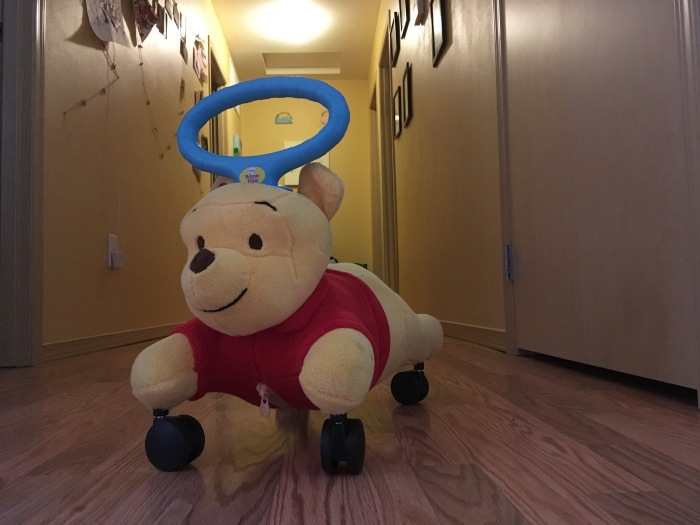 At about 4 in the morning I wake up hearing movement. I sit up and see Keenan on his Winnie the Pooh rolling scooter thing. He’s scooting up and down the hallway like the creepy kid in The Shining.

I convince him that we should go buy gas for the lawnmower. We get dressed and ready. Hattie hears the prep work and starts to rustle awake. I lay down with her while Keenan waits by the stairs. She settles into sleep again.

Keenan wants to carry the gas can down the stairs. We have 27 or so stairs to the car. Alone it takes him an hour to walk down, carrying the 2 gallon gas can doesn’t speed up the process.

Once in the car seat I’m fairly certain I can get my boy to sleep! So I pass the first six stations and put on the This American Life podcast hoping to bore him to sleep. I pull into the Costco fuel station but evidently they aren’t 24 hour pay at the pump anymore. Cruise on down the road…

By the time I get to the Fred Meyer Keenan’s head is nodding. I give him a tissue to blow his nose and go to pump the gas. I type in my rewards number and grab for the debit, shit it’s not in my phone case, they don’t take Apple Pay. Back on the road. I pop into a station that does. Keenan is officially out.

I drive back to the house, unload the gas can. Carry the sleeping kid up the 37 or so stairs. Yes, there are more going up. Empty my pockets and found the debit card folded in a receipt.

It’s 8 now, guess I oughta now the lawn. I’ll wait for everyone to wake up.

Keenan mowing in my tracks